In 1988 our founder Minette Russell-Young who moved to the area upon her retirement as a lecturer in Botany and Ecology at the Burnley Horticultural College was struck by the lack of indigenous vegetation and denuded areas in the then City of Box Hill. She took on a mission to make the City of Box Hill Green, which she pursed until her death in 2002. With a group of like- minded friends and acquaintances she held a meeting on the 1st September 1988 and formed Greenlink with the purposes of Greenlink being. 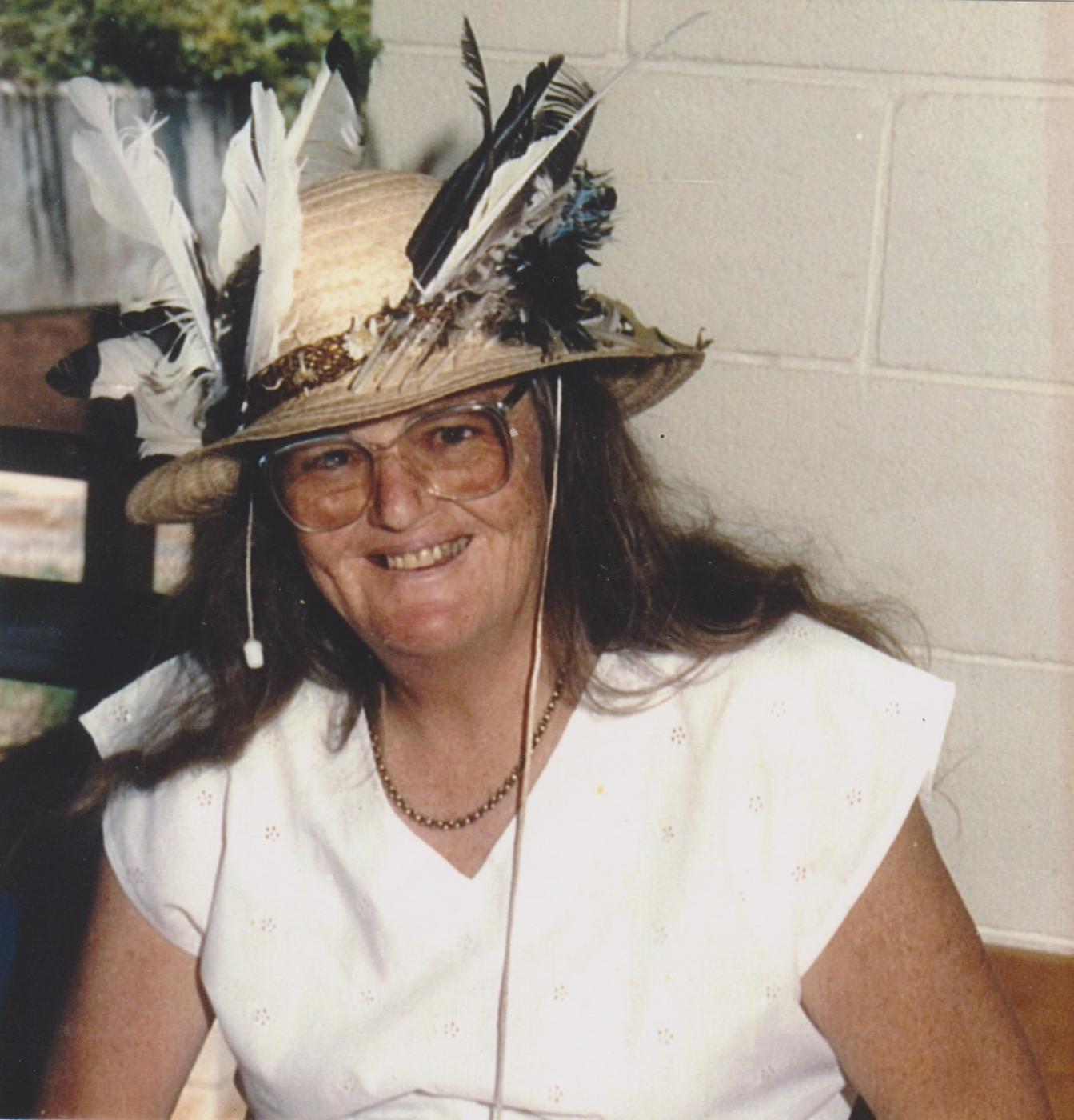 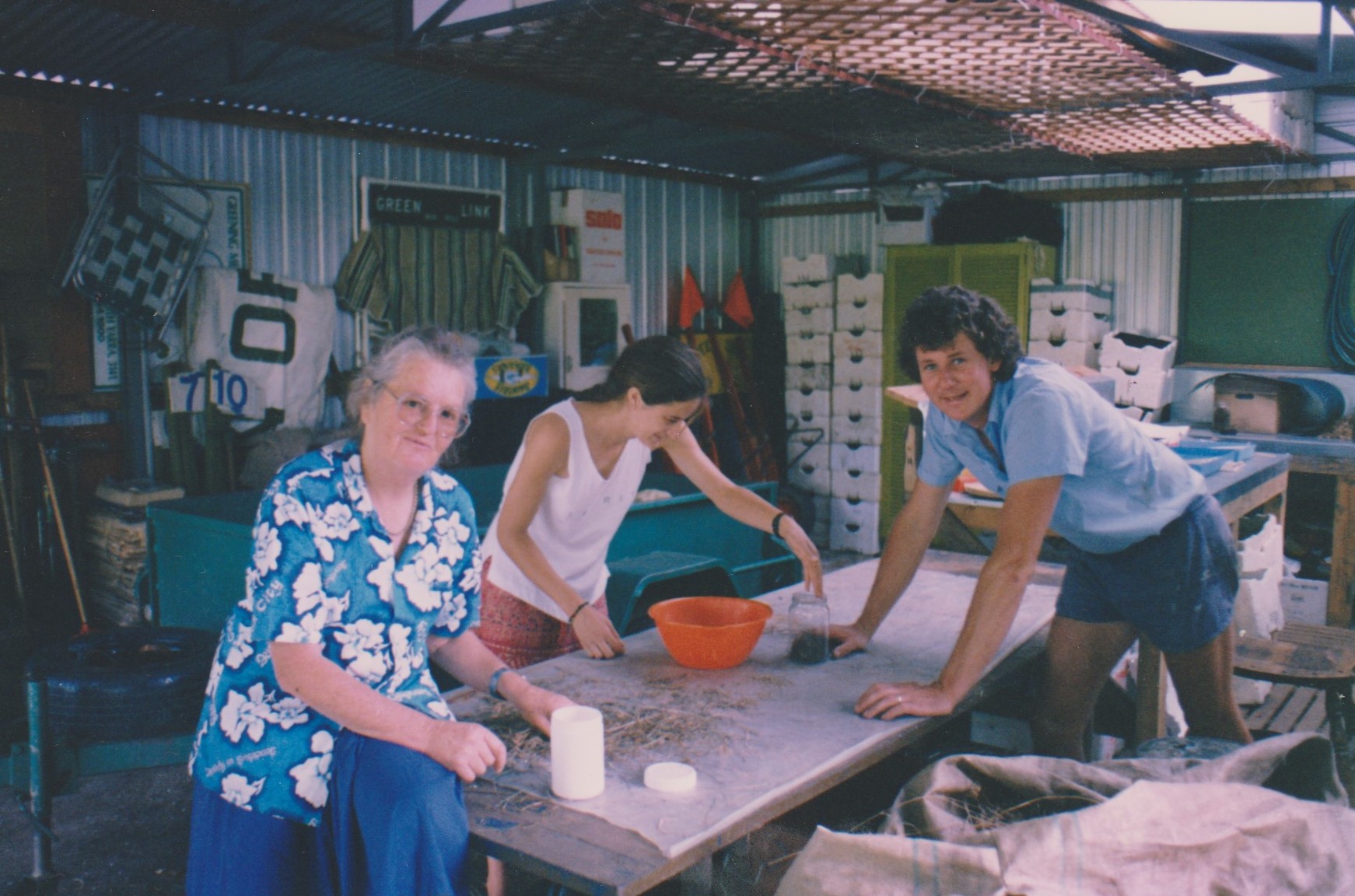 Greenlink began its life at the back of the then City of Box Hill Nursery in Nelson Road, now the RSL Club site with volunteers growing their first lots of indigenous plants and tracking down seed and cuttings from what remained in the area of any pockets of remnant bush land, much of which subsequently disappeared with the construction of the Eastern freeway.

Following the amalgamations of the then cities of Box Hill and Nunawading to form the new City of Whitehorse the old Box Hill council Nursery was closed and we were relocated to our current site in 1996 where we developed our present nursery. The current layout of the Nursery is much as it was in 1996 although most of the infrastructure has now been rebuilt.

In our early days much of Greenlink’s efforts were concentrated on planting out our plants into many of the denuded areas of Box Hill such as Gardiners Creek, Frank Sedgman reserve, Bushy Creek reserve and after the construction of the Eastern Freeway a large portion of Elgar Park along the realigned Bushy/Koonung Creeks. 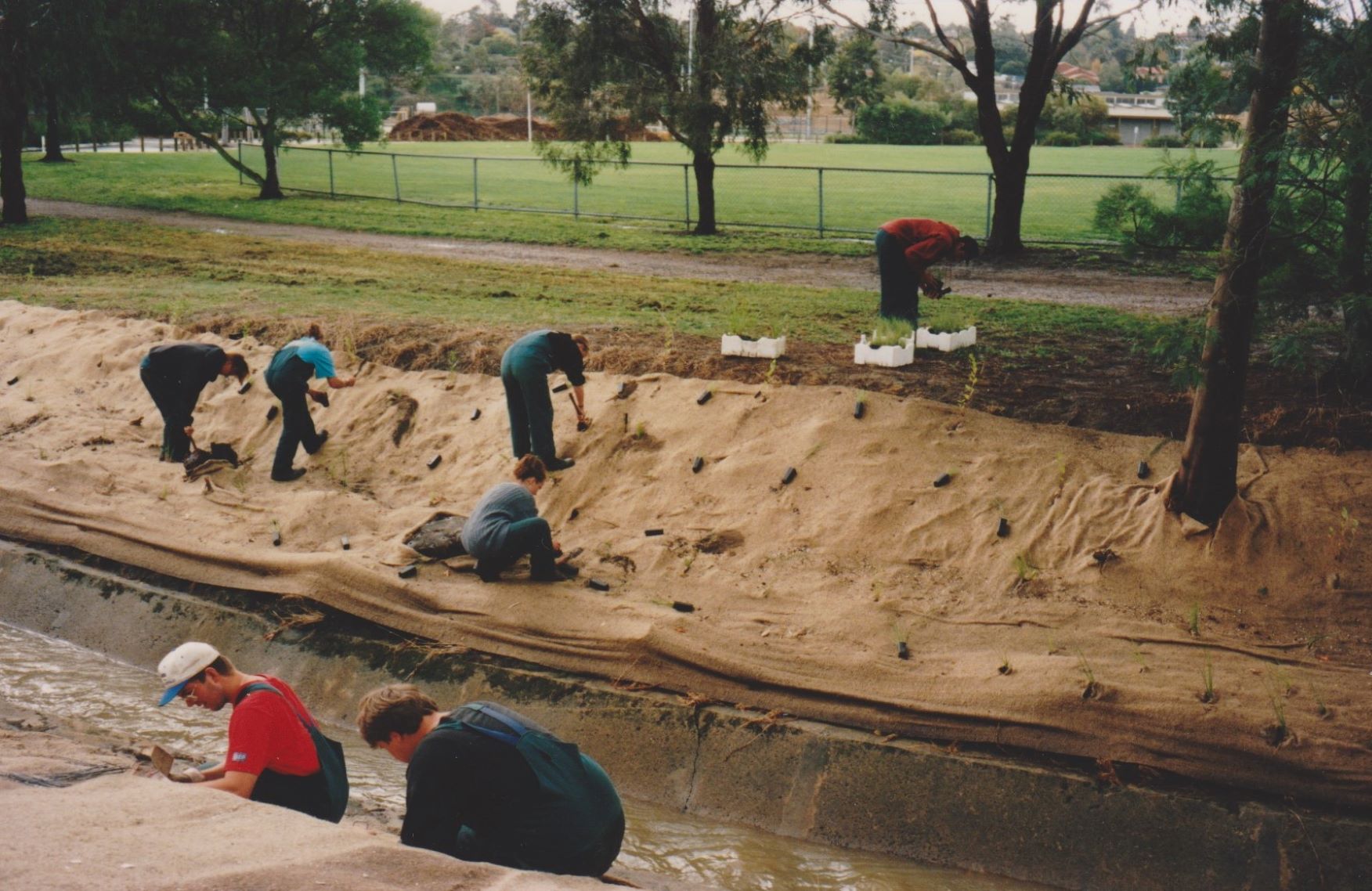 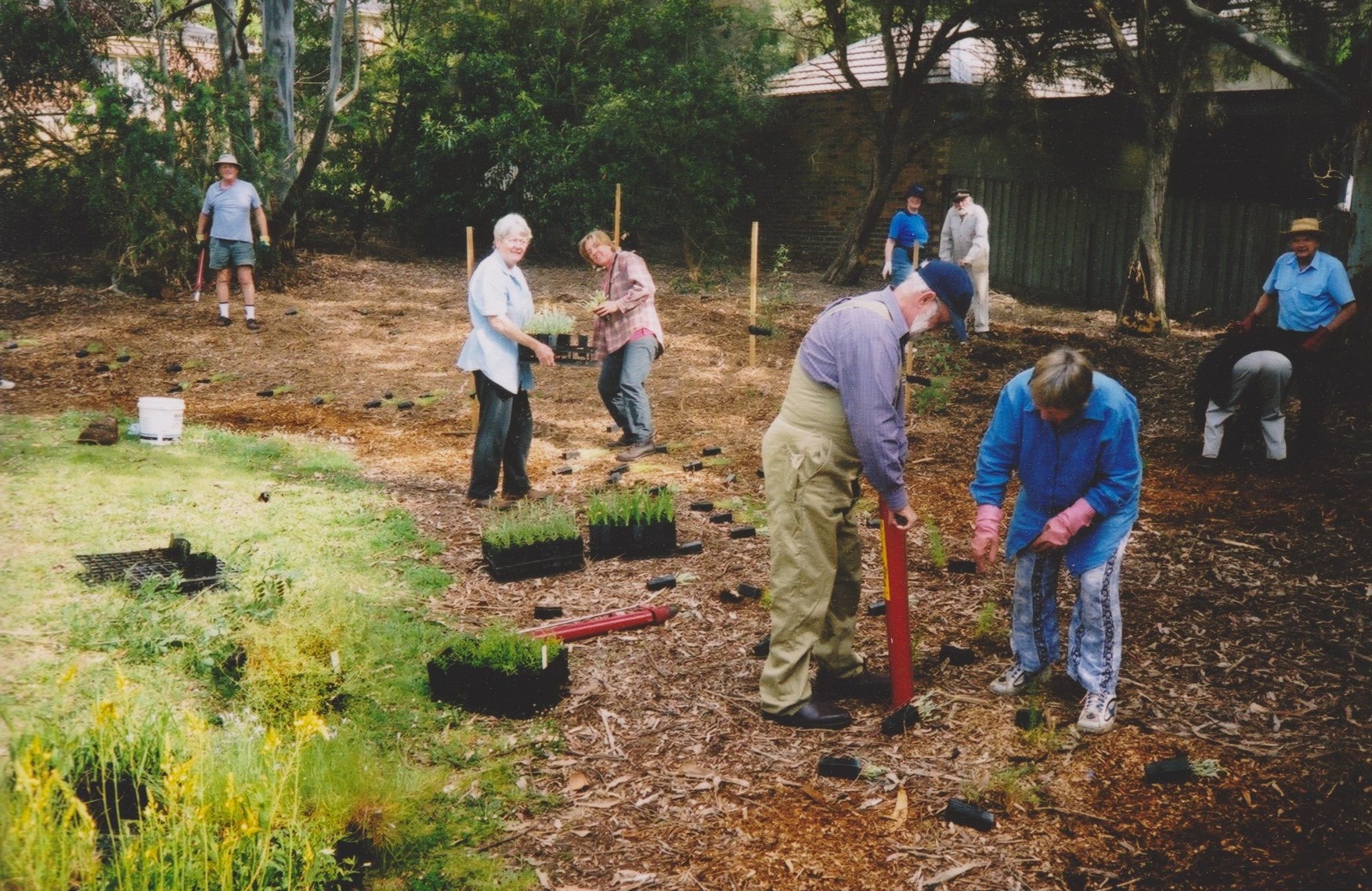 Many of these areas had previously been overgrown with weeds, willows on what remained of creek beds and blackberries, a far cry from what you see today. Even the area of park around the Nursery was previously basically just mowed couch grass with the odd tree scattered about which was typical of the open areas of “park land” a couple of decades ago.

Since we began in 1988, Greenlink has grown over half a million indigenous plants supplying them to organisations such as Melbourne Water for revegetation projects, many of the local schools, various councils including our own City, landscapers and the local residents.  We have for many years provided a voucher of buy 5 get 5 free plants which is in the Council's yearly calendar that is distributed to every household in the City which allow us to give away over 1,000 free plants per year to the community.  We also support Gardens for Wildlife programs in our own City of Whitehorse, the City of Monash and the City of Boroondara.

We grow around 45,000 plants each year, have a membership of over 90 people with volunteers' efforts amounting to just on 5,000 hours of work each year. Our Nursery is fully able to self-fund its operations and is completely operated by volunteers. As well as collecting from our indigenous stock plants, Greenlink also gathers plant material, from the small pockets of remnant bushland in the City of Whitehorse, and hold the appropriate licenses for this activity.

Also, for many years Greenlink had taken on a project at a property in Kilmore, in the early stages in conjunction with Landcare. The property had been badly eroded from the clearing of vegetation and subsequent soil erosion. Over the years we have grown and planted out many thousands of trees and grasses that have now stabilised the creek beds and brought a significant tree canopy back to the farm. 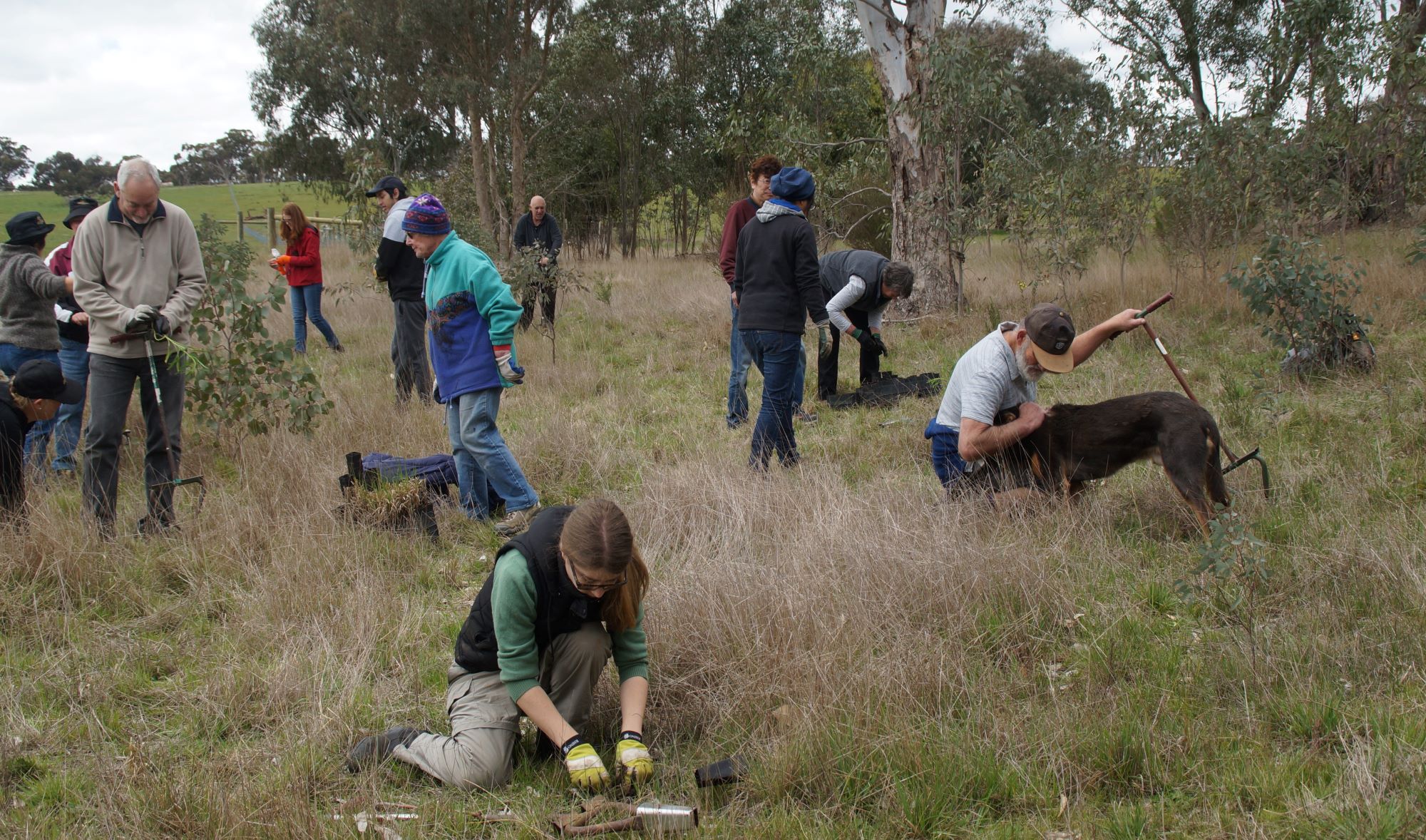 Over the years the nature of our Nursery has evolved from what started growing plants and having working bees to plant out the plants in the denuded areas of the City of Box Hill to reintroduce indigenous plants and green the denuded areas of what remained of creek beds to now primarily a nursery growing plants for sale to public, government and private organisations. 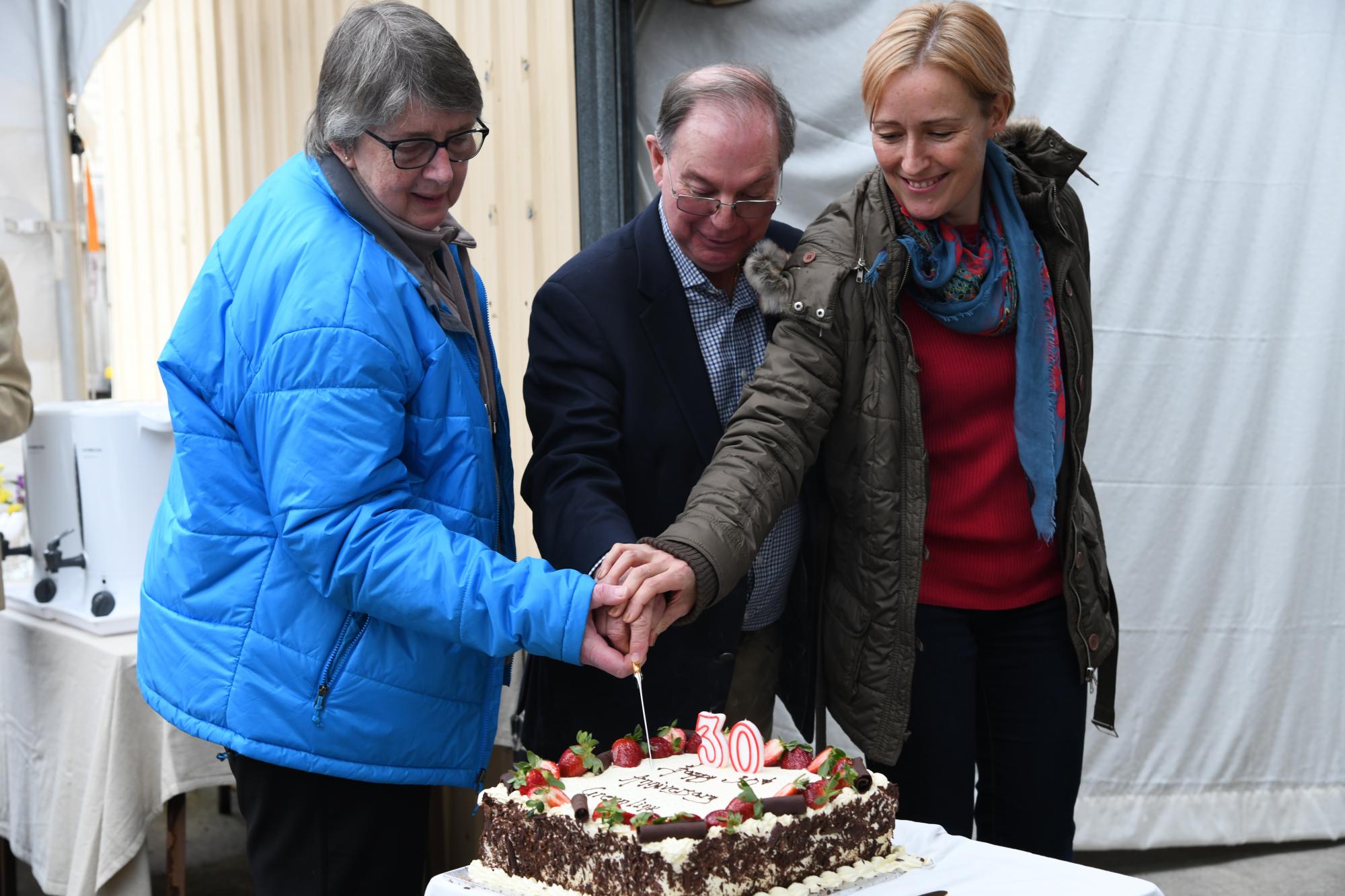 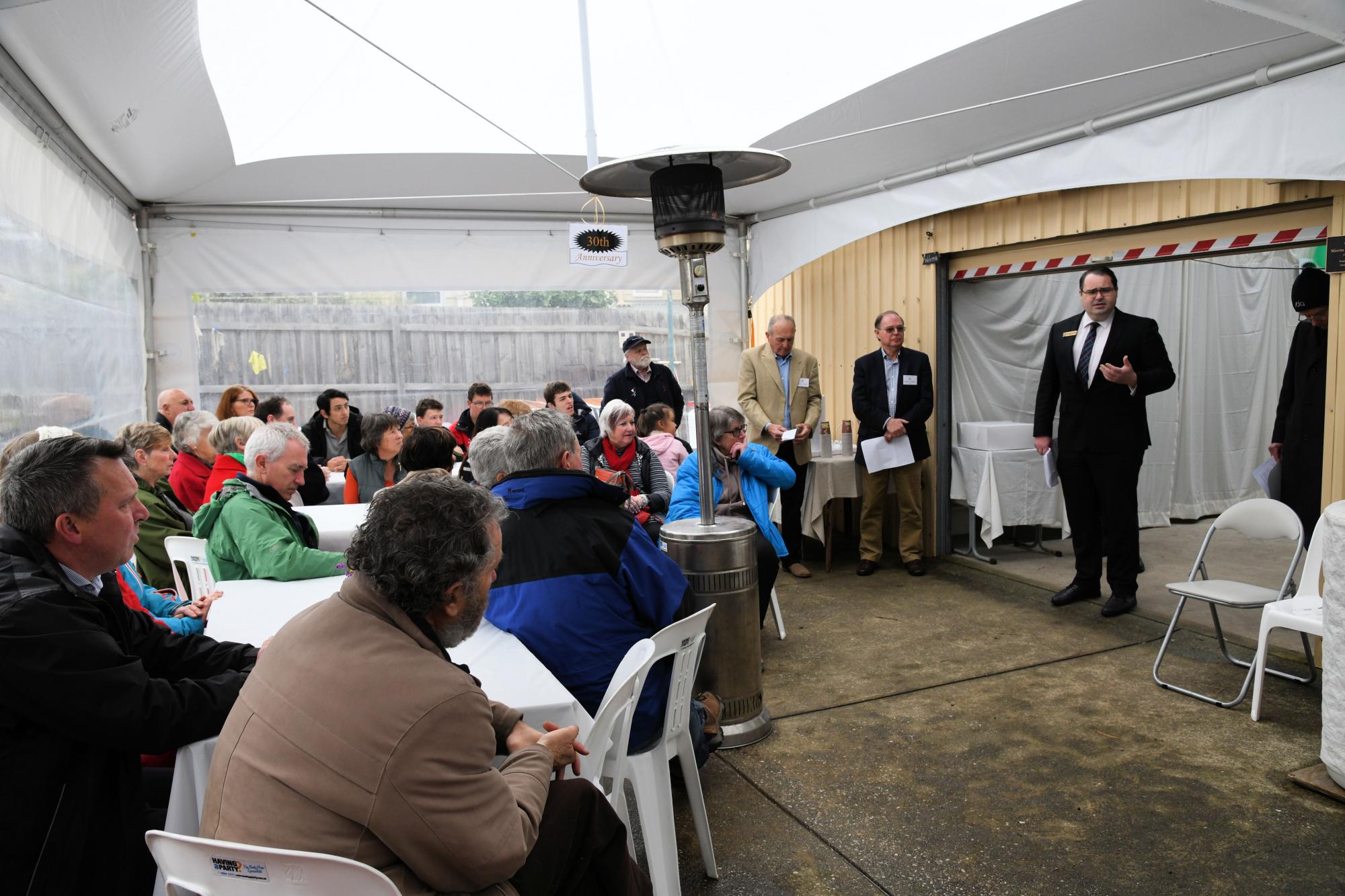 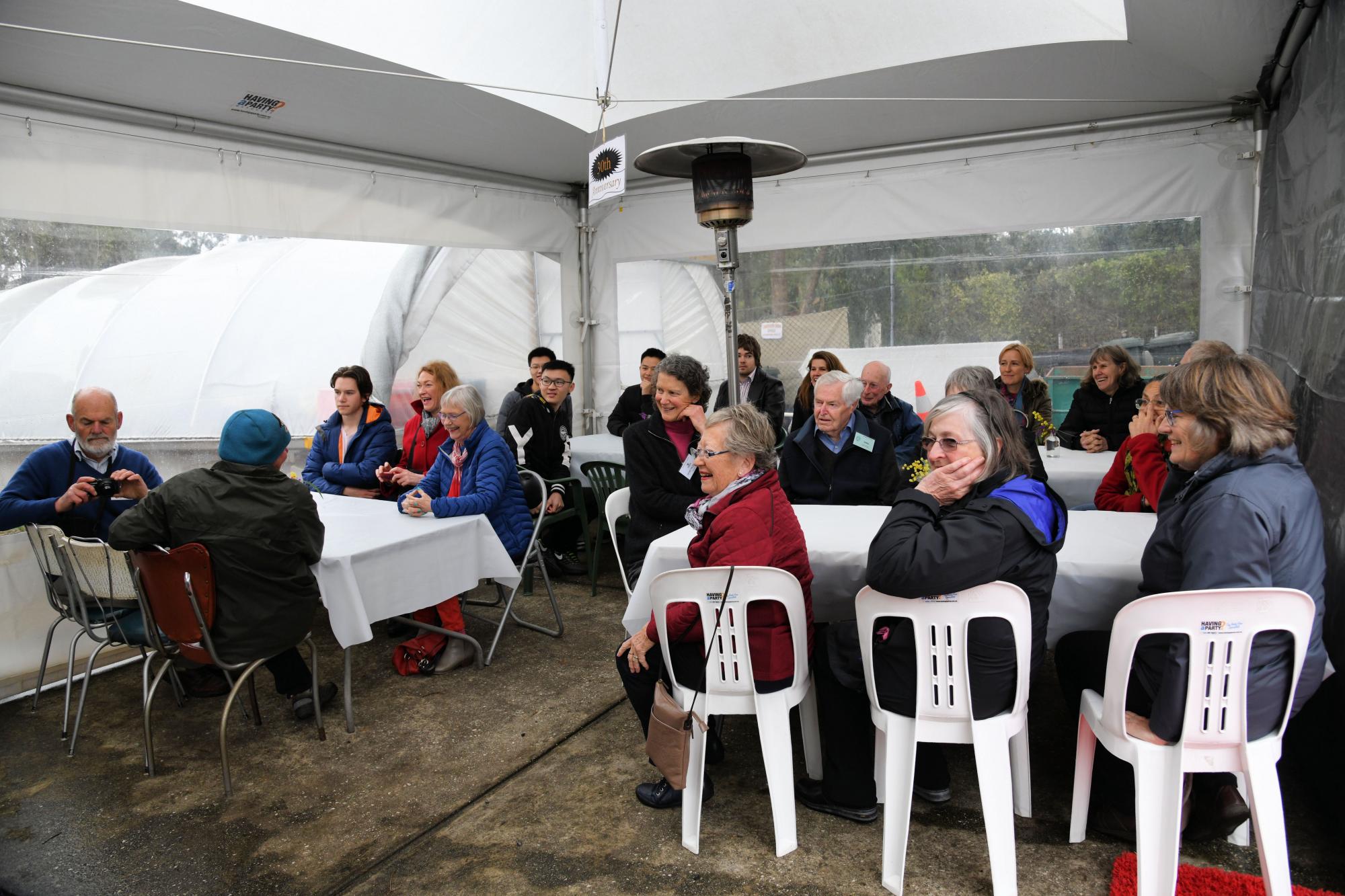 Saturday, 1 September 2018 was the commemoration of Greenlink’s 30th anniversary. It was exactly 30 years ago to the day that Greenlink held its first Committee meeting and the nursery has been operating continuously since then. On a cold, wet and wintry day about 60 people turned up to celebrate with a splendid afternoon tea.

In attendance were members and volunteers of Greenlink including some who have been working with Greenlink since its foundation. There were two past Presidents, three Councillors from the City of Whitehorse and others who have close associations with us.

We had speeches from the Mayor of Whitehorse Andrew Davenport, our local State member Robert Clarke MP, Brian Pell (OAM) and our current President Robert Jones. All expressed great appreciation to the founders of Greenlink and to the ongoing work of the volunteers who keep the Nursery a growing, vibrant and exciting place to be.

Emi’s meticulous planning resulted in a very special and decorative afternoon High Tea with tiered cake stands and a great variety of delicious food. A video of the history of Greenlink from its foundation which played from a television set inside the marquee as also created by Emi together with 3 photo collages of the last three decades. These were on display in the nursery and were greatly appreciated by members old and new.

Our Treasurer, Trevor Eddy as MC was determined to have the last word. He gave a very memorable speech about the Wurundjeri people, indigenous custodians of the land including the creek which ran behind the nursery, now known as ‘Bushy Creek’. He told us how he and Josh had dug up some witchetty grubs the previous week at the base  of a manna gum (Eucalyptus viminalis). The name Wurundjeri derives from wurun (manna gum) and djeri (grub living on the tree).

The Mayor of Whitehorse, Andrew Davenport planted a rare Eucalyptus globoidea (White Stringybark) in prepared soil in the parkland adjoining the nursery. This tree was chosen by the Committee to honour the founder of Greenlink, Minette Russsell-Young. This was a species of eucalypt identified by Minette in Wurundjeri Walk (Blackburn South). 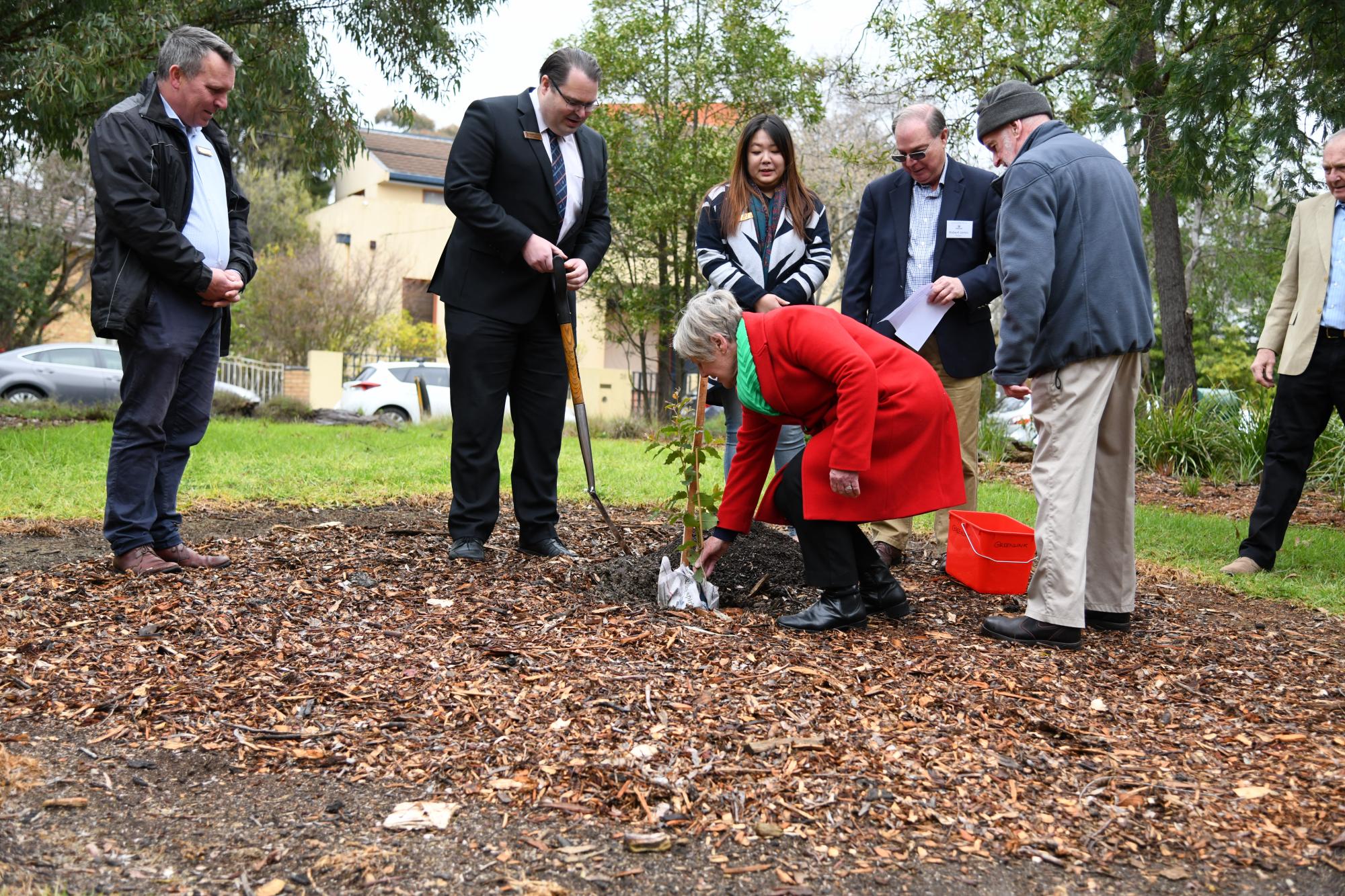 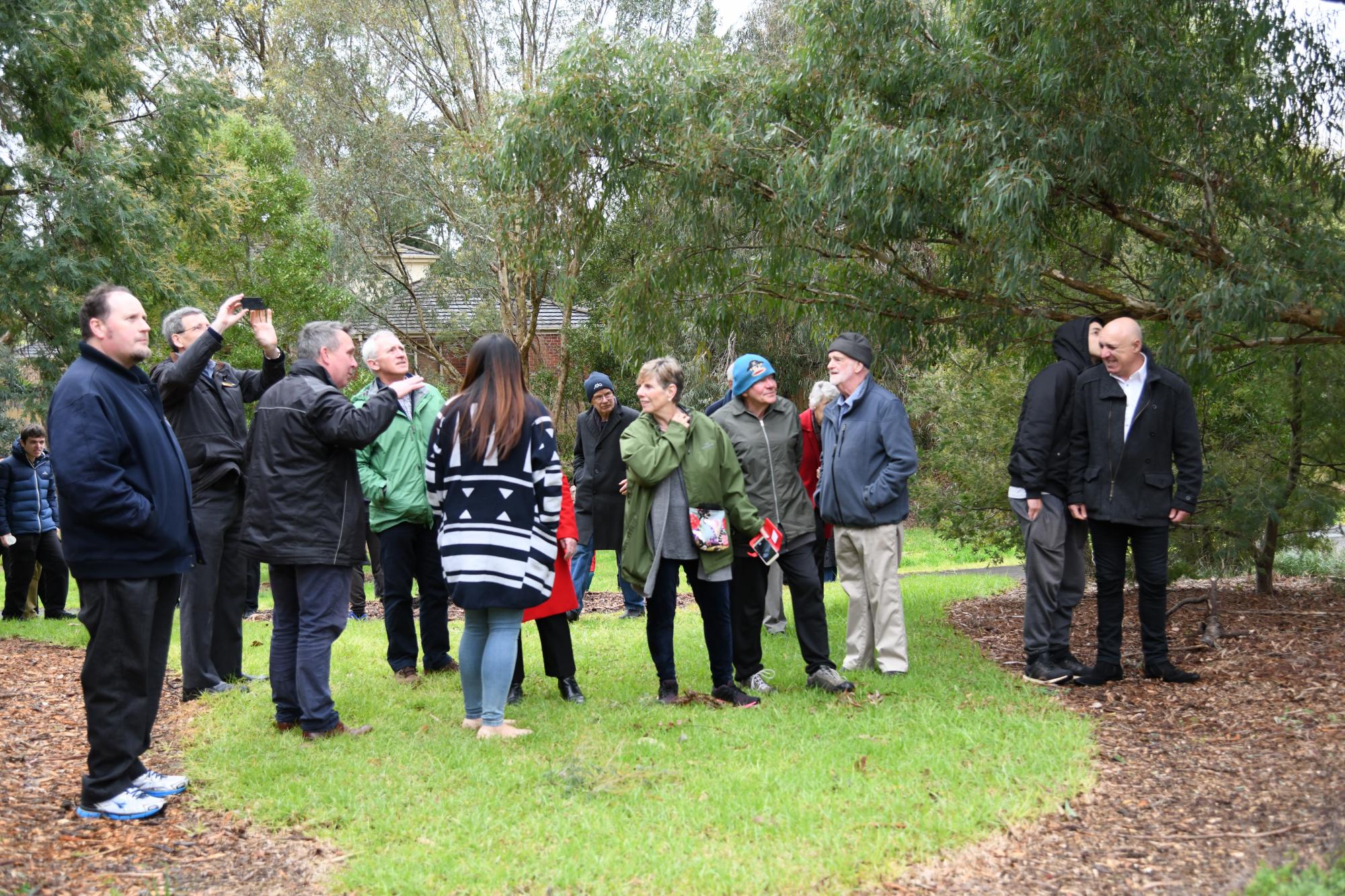 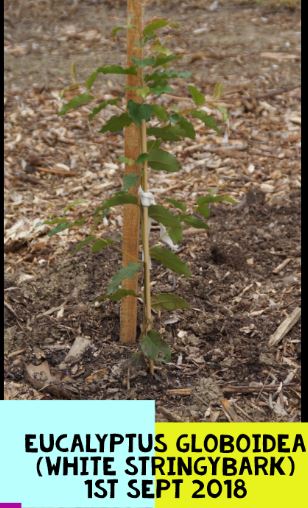 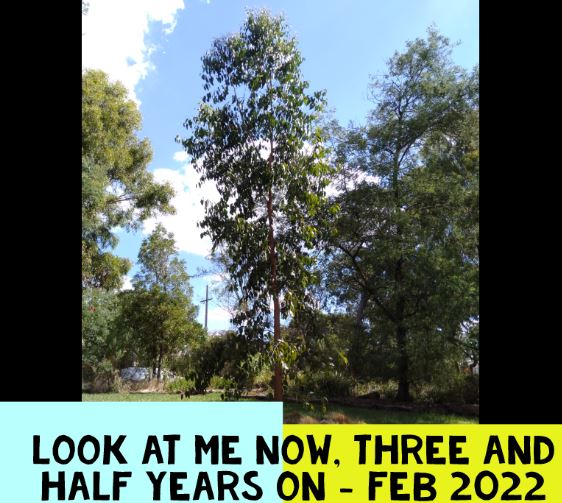 Comment’s from a few of our guests:

Tina Liu, Elgar Ward Councillor:  “Had a great time and thank you again for inviting me to join in celebrating such a wonderful milestone! Very appreciative to you and the Greenlink family for your dedication and hard work over the years. We are a very lucky community indeed to have such active and passionate community members and I’m sure you know that Greenlink has my full support.  Keep up the great work!   With kind regards, Tina”

Millie Wells – City of Whitehorse: “Thank-you for a wonderful celebration. So lovely to hear how Greenlink all came about and how deeply seeded in the community it is. Congratulations on a wonderful event.”

Brian Pell OAM – Life Member: “Congratulations and thank you for a wonderful occasion especially Emi for the great catering result. It was good to connect with many former Greenlink members and friends. A lot of them fondly remembered their involvement with the activities, some of which we are no longer are involved with. The other interesting comment from several was the happy harmonious working environment that they enjoyed and is still such an important aspect for volunteers. I have always stressed the importance of contact with Councillors and politicians, and the turnout today showed how highly they regard Greenlink. A great day and you all should feel very pleased. Keep up the good work.”